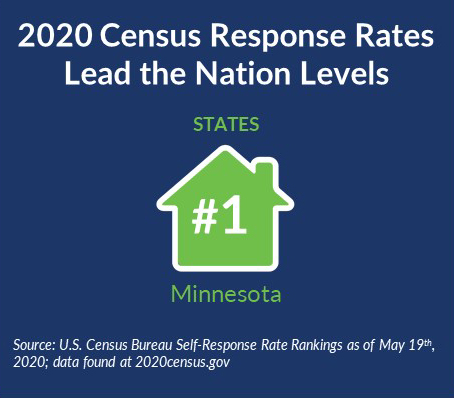 Our lives have been turned upside down by the COVID-19 pandemic, forced to make significant adjustments to our family and work routine, and for many, the uncertainty and hardship of unemployment.  Through the cyclone of change that has taken place it is possible that you may have missed a significant event that is taking place as we speak, an event that happens only every 10 years, the 2020 Census. This week I will be sharing some exciting information about our region’s national leadership in responding to the Census, a point of pride for our state and region. I will also be expanding on the challenges we face to get a true complete count.

The Census is critical to the work we do at GREATER MSP and to the employers and public entities that form the Partnership. Businesses large and small make critical decisions based on population dynamics that are uncovered through census data, including where to locate storefronts, offices, and manufacturing plants, and the products and services that are offered. A complete count is critical because the results of the 2020 Census will affect community funding and congressional representation. It is also important to us because GREATER MSP is a data-driven Partnership, and our region’s strategic priorities to accelerate competitiveness and inclusive economic growth are informed by the data. If we want programs and policies that reflect our population’s needs, we need the data to accurately reflect our population and our population’s unique characteristics.

This week Peter interviewed Councilwoman Alondra Cano who represents the Nine Ward on the Minneapolis City Council. Councilwoman Cano represents a community that is vibrant and diverse, and our region overall is becoming more diverse. Because of the Census, we know that in 2018 the total Latinx population in the Greater MSP region was 214,077, approximately 5.9% of the regional population. We also know that the Latinx population grew 14.3% over the last 5 years, compared to 1.5% for the white, non-Hispanic population. Population dynamics are changing. For the first time in the Greater MSP region, the population 15 years old and younger is majority-minority. In 2018, 45% of people 15 and under were white, non-Hispanic and 55% were people of color. Our region is becoming more diverse, and our needs are changing as a region. We know this because of the Census.

This region, and state, has a history of being a leader in Census response, which is no surprise considering our high level of civic engagement and volunteerism. The state of Minnesota is firmly in the #1 spot after jockeying with Wisconsin in the early weeks of response. Carver County and Anoka County have the 4th and 5th highest response rates in the country at the county level, respectively. Our region boasts 8 small cities ranked in the top 100 and 14 medium cities ranked in the top 100 nationwide. For large cities over 300,000 population, Saint Paul is 3rd and Minneapolis 7th for the highest response rates nationwide. We should be proud of this leadership position and consider it a strength for our region. 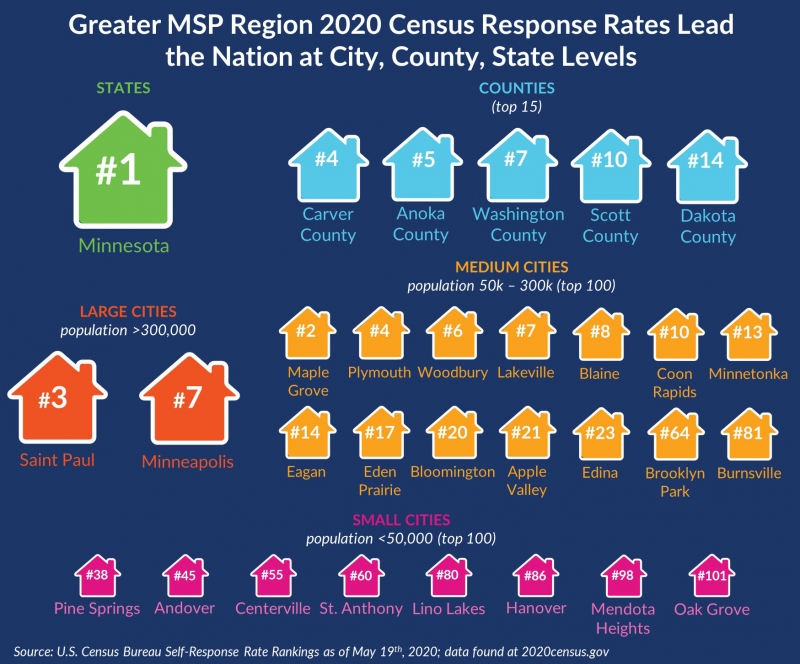 Still, we have communities that are not getting counted.

After several months of participating in the St. Paul-Ramsey County Joint Complete Count Committee, it became clear to me that getting a complete count is challenging. There are communities that are just harder to count. Most concerning for our region are the population groups that are undercounted because of fear, lack of understanding, or requiring additional guidance. These historically undercounted groups include people of color, indigenous people, undocumented immigrants, and low-income persons. In past decennial counts, resources have been available that allowed Census workers to knock on the doors of residents who needed more guidance or explanation, which helped in reducing the undercount. There is concern this year that a lack of funding will limit this extra attention. On top of that, COVID-19 health concerns will keep Census workers from being able to do this important door knocking follow up. The Census Bureau has suspended field operations until June due to COVID-19 health concerns.

There is a historical pattern of undercounts by community. The Minnesota Demographic Center and the U.S. Census Bureau map these historically undercounted communities by census tract, which is a Census-defined area roughly equivalent to a neighborhood. There are 32 census tracts in the region that are considered to be the hardest to count, with 30% or more of the population not self-responding in past census enumerations. Twenty-three of the tracts are in Hennepin County representing over 88,000 residents and 9 are in Ramsey County representing over 32,000 residents. These areas coincide with areas that have more people of color and indigenous populations, and immigrant/refugee communities.

Active updates of 2020 Census response rates show that these historically undercounted neighborhoods are also areas with low response rates as of May 19, 2020. Ramsey County Complete Count Committee leaders are sharing that low-response areas at this time include Summit-University, Rondo, Frogtown, East Side, and North End neighborhoods. In these communities, self-response rates are flattening out around 50-55%. Data for Minneapolis is showing that there are approximately 16 census tracts with response rates below 50%. 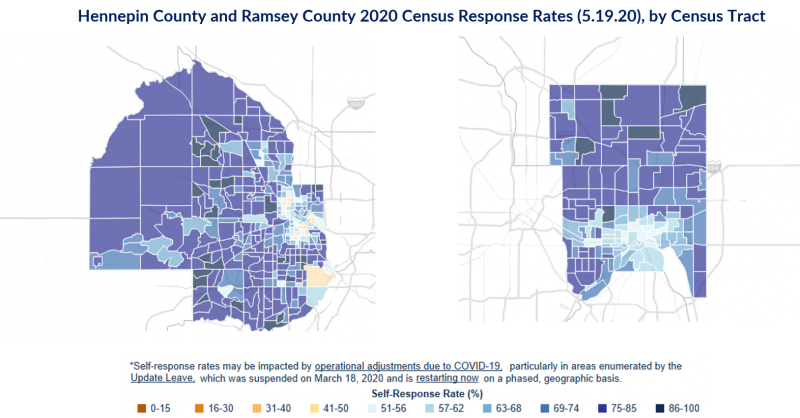 One specific challenge for volunteers is doing outreach to specific geographic areas while maintaining social distance standards. One method volunteers are being advised to reach these communities is by posting information at small/ethnic grocery stores, and they are looking for ways to partner with small business owners to distribute information.

Leaders in the Latinx community have focused efforts at engaging through virtual methods and social media. Cuanta Conmigo is a Complete Count Committee formed by a group of entrepreneurs, lawyers, community leaders, and volunteers to promote Latino participation in Minnesota in the Census. Their efforts are focused on addressing two key barriers: lack of information on the Census and concerns about security and privacy. To learn more visit their Facebook page. To learn more about 2020 Census issues specific to the Latinx community, visit Communities Organizing Latinx Power and Action here.

We can all continue to encourage our employees, colleagues, friends, and neighbors to respond to the Census by going online at my2020census.gov , by phone at 844-330-2020, or by mail.

While we should be proud of our state and region’s strong leadership position in the 2020 Census response, we must ensure the data fully represents our region’s population, focus on not leaving anyone behind, and make sure everyone feels safe to be counted.